Growing up, my Mother would make an old fashion Maple Nut Twist from her very own cookbook that was a maple-y cinnamon-y sticky yeasty sweet roll in the shape of a twist. It was nothing shy of fabulous. When I think of a yeast base sweet roll, that’s what I think of. Coming out of the oven, we just couldn’t wait to sink our teeth into this delicious breakfast treat.

The only downside was it took a while to make. So, I embarked on doing something that was easier, but had the same yeasty maple-y flavors. I decided on Monkey Bread. There are lots of different variations of monkey bread using different types of dough ranging from canned biscuits to homemade yeast dough. Well, I didn’t really want to go to the extreme of making my own yeast dough and went to the freezer section of the grocery store and bought a pack of the dough balls. They come in a bag, usually 36 dough balls about 1 1/4 inch in diameter. It’s just frozen dough that hasn’t risen or been pre-cooked. Perfect.

Back to my kitchen I went to make this Monkey Bread. I even ordered an angel food cake pan since it’s bigger with smooth sides and bottom plus I felt would do better than a Bundt style pan. I got one of those ‘special’ ones that you can lift out the center to make it easier to put on a cake plate. Well… Keep reading on down to get the rest of the story…

Here’s how I make it. 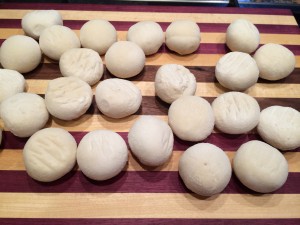 Here are those frozen dough balls.  They are anywhere between 1 1/4″ to 1 1/2″ in diameter.  Set them out on a cutting board and let them thaw for about 30 minutes before cutting.  The idea is to thaw them on the outside, but still firm in the center so they slice easily. 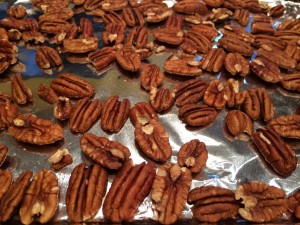 While those dough balls are thawing, toast the pecans.  Spread them in a single layer on a baking sheet and put them in a preheated 350 degree oven for 8 minutes.  When you can smell them, they’re done.

In a gallon zip top bag, mix together the sugar and cinnamon.  Set aside.

After about 30 minutes of thawing, the dough balls should cut easily.  With a sharp knife, cut them into quarters and put them into the gallon zip top bag containing the sugar and cinnamon.  Toss them around to coat each piece.

Ok, here I need to tell you what I used for baking the Monkey Bread in and what I recommend.

As I said earlier, I ordered an angel food cake pan for this Monkey Bread.  It is a two piece meaning the center comes out.  (see picture above)  I thought it would be ideal because the center tube is taller than the pan and I could just lift out the bread.  Well, two things happened.

One:  Even though the insert part of the cake pan sits down in a grove to prevent leaking of Angel Food batter, and even though the hot syrup did not leak when I poured it over the dough pieces… it did leak a bit while baking.  So, if you want to still use your two piece, just wrap the outside bottom with aluminum foil.  That will contain any of the syrup from getting into your oven.  Just for the sake of double protecting your oven, you can put the cake pan on a baking sheet too while baking.

Two:  Even though I was planning to pull up the center and set it on the cake plate, that didn’t work.  You really want to invert it so the sauce can pour over the top.  With this being a two piece, when I inverted it onto a cake plate that was deep enough to have room for the sauce, the insert piece wanted to fall out making the whole process a bit unstable.  Just use care so that the sauce doesn’t drip all over the counter.  Been there, done that.

So, while it is easier to use a one piece angel food cake pan, you can use a two piece with modifications and caution.  I have since then used one of my 10 cup bundt pans and it worked great too.  See the bundt pan I used in my Old Fashion Black Walnut Cake.  It worked perfectly and I found a bit easier just because it was a one piece.  I will say that the dough rose above the rim.  So, just be sure to use a clean damp towel because the dough will rise against the towel and I had to carefully peel the towel away from the dough. 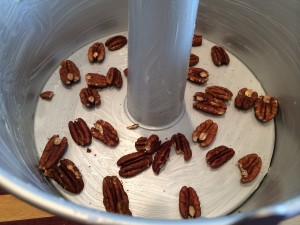 Spread about 1/2 cup of the toasted pecans in the bottom of your 12 cup cake pan. 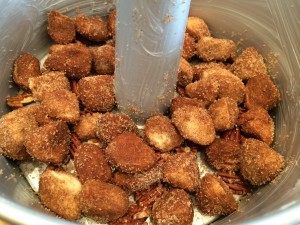 Then place 1/2 of the cinnamon sugar covered dough pieces on top of those pecans.

Spread another 1/2 cup of pecans on top of the dough pieces. 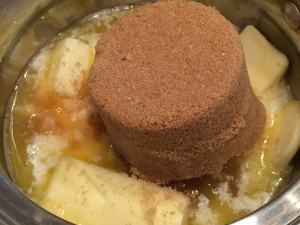 In a large pot, melt the butter with the sugar and… 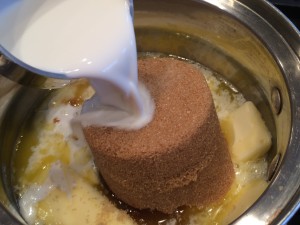 …the cream, plus the… 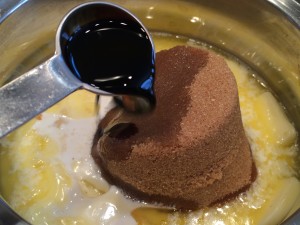 Bring to a boil over medium heat and cook for 2 minutes.

Pour this delicious sugary maple-y syrup over all of the dough pieces and pecans. 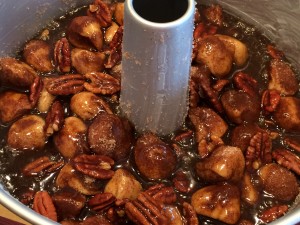 Looks good enough to eat already!  But not just yet, gotta let it rise first.

So cover it with a damp towel and let stand in a warm place for 40-45 minutes until it has risen.

Here’s a tip:  If you’re in a hurry like I always seem to be, preheat your oven to about 180 degrees and TURN IT OFF.  Then put the covered cake pan into the warm oven and let rise about 30 minutes.  That’s how I did it last time and it worked perfectly.  Just saying…

It will continue rising a bit while baking, then it’ll become toasty brown on top.

Let rest 5 minutes and carefully invert onto a cake plate deep enough to allow room for the caramel sauce to drip down.

You can see the individual roll pieces covered in that sweet sugary maple sauce.  Many folks call this ‘pull apart’ bread because you can do just that!  Grab you a plate and start pulling! 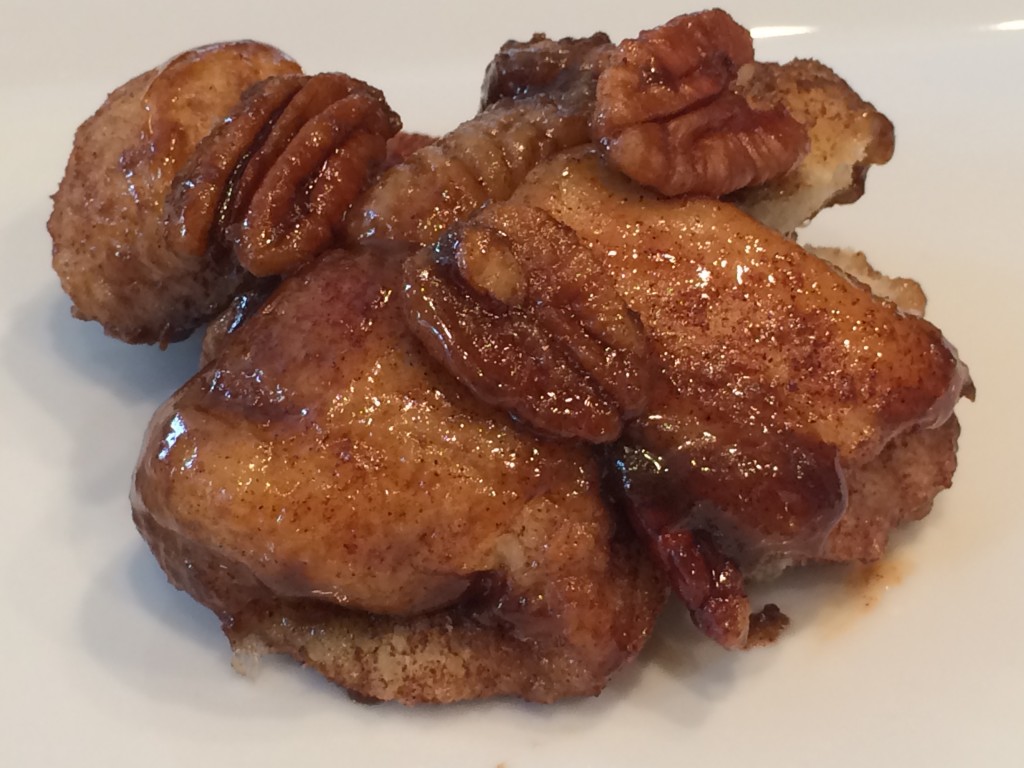 It is so succulent and delicious with that second cup of coffee.

If you have any left over for the next day, just pop a serving in the microwave for 10 seconds and it will taste just like it came out of the oven.  Love it!!

What is your favorite breakfast bread/pastry?

Growing up, my Mother would make an old fashion Maple Nut Twist from her very own cookbook that was a maple-y cinnamon-y sticky yeasty sweet roll in the shape of a twist. It was nothing shy of fabulous. The only downside was it took a while to make. So, I embarked on doing something that was easier, but had the same yeasty maple-y flavors, hence this Maple Nut Monkey Bread..

We have a new look!

We are excited to launch a new look for our website! As with any changes of this magnitude, there will be some updating done to each post. So if there is a thumbnail picture missing in the listing, I apologize for the inconvenience and I promise to work hard to get them updated in a timely manner. Love and Hugs!

Subscribe so you don’t miss a recipe! It’s Free!